Losing sleep: Let's open our eyes to the facts and make proper rest more than a museum piece

For just six weeks this summer, a dim, hushed room at Art League Houston displayed a relic from the past: people taking naps. Called N.A.P. — short for Napping Affects Performance - and designed by artist Emily Sloan, the space offered soothing gray walls, soft white noise, and cots outfitted with immaculate sheets and fresh pillows. Visitors were welcome to lie down for a nap - and for much of June, many did.

Sloan's room was an art piece, but its celebration of daily downtime without shame, multitasking, or furtive checking of e-mail is backed up by science.

Adequate sleep is endangered in the United States, a deficit strongly linked to the chronic health problems draining us economically and politically. Too little rest, for example, has been shown to throw off hormone output that regulates satiety after eating and the ability to process sugar. Dozens of other studies link inadequate sleep to obesity, heart disease and diabetes.

And it's not just medical students and pilots who are tired. Americans overall get an overage of only 6.9 hours' sleep a night - an hour less than we slept in 1960 and 15 to 25 minutes less than we did in 2001, sleep physician Lawrence Epstein wrote in Newsweek. These seemingly small quantities of rest can have a stunning effect on functioning. Just 20 to 30 minutes of napping can measurably improve mood and performance, the National Sleep Foundation reports. And in one NASA study of sleep-deprived pilots and astronauts, a 40-minute nap boosted performance more than 30 percent - and alertness by 100 percent.
Sleeplessness may have the most pronounced effect, though, on children. All of the 31 major studies of children's sleep and weight gain showed strong correlations between too little sleep in childhood and obesity either in childhood or years later. Meanwhile, families that police their children's sleep habits with an old-fashioned rule about bedtime also achieve the 21st-century holy grail: higher test scores, according to the nonprofit SRI International research center.

While afternoon naps may have served an evolutionary purpose, the rhythms of U.S. culture pretty much make them impossible. Nonstop accessibility by phone and computer, plus social pressure to work relentlessly, undermine many a decent night's sleep at home. Siestas seem unthinkable. Yet it's become clear that proper sleep is one of the cheapest, most potent tools we have to help rein in our national health care bills.

It would take a concerted effort to re-cast the workday nap as a respectable - even responsible - activity. But it was also tough to get Americans to quit smoking. Reviving the nap, in fact, might be surprisingly popular. The cozy Art League complex isn't usually the site of protests, but as Sloan's show neared its closing date, scrawled placards appeared on the tree and walls outside: SAVE THE NAP ROOM. It could have been the work of angry art lovers. But maybe it was the whisper of a silent majority, yearning for the focus and peace that comes from 20 minutes of socially approved shut-eye.

Claudia Kolker
Posted by Emily Sloan at 12:03 PM No comments:

It all started with an invitation—for a nap. Emily Sloan invited me to snooze as part of NAP (Napping Affects Performance), a performative installation at Art League Houston. How could one resist an invitation to nap?

I have always had mixed emotions about napping. As I move deeper into my 50s, I worry about becoming one of those people who nap on and off all day. Yet, I remember the heavenly state of my children, who napped during their early years as all children do. Once, my sister asked why my baby son slept so much of the day when he didn't actually do anything.

Do we need to shut down as well? How can that be an artful experience?

Sloan addresses these questions with humor, rigorous investigation of collective aesthetic activities, and her own whimsical ethos, which permeates every aspect of the project.

When I finally arrived for my scheduled nap, I was immediately struck by the sense of calm in the Art League building. Something was different. Wandering through the halls, I came upon a door with a sign that read, “Shhh, we are napping, come in.” I was drawn
to the ambiguity in the statement. We are asleep but we want you to come join us. Felt just odd enough.

The room projects peace and serenity. Blue-gray walls yield an uncanny warmth. The color extends only three-quarters to the ceiling, sending a grounded feeling. A white table, with delicate lamps on either side, recalls my teenage bedroom. Cots gracefully set around the room have a tiny hint at a clinical environment, as does Sloan, who appears in full naptition garb. Sloan was on duty the entire run of the show. “It was extremely fulfilling to be a part of the project every day,” she says. “I felt relationships grow, saw people awed by its simplicity and beauty, and enjoyed the many, often repeat visits.” The quasi-medical perfume is part of the fantasy. I am thinking of public napping stations in some future world, where people would be encouraged to take a break from anything they are doing to refresh, and simply let the world slip away for a cat nap during the course of their hectic day.

Now is a good time to remember that about half of the world engages in some form of mid-afternoon siesta, if not sleep, it's a rest and a welcome break. Currently, the siesta is under siege as the manic pace of the Western world slowly creeps southward.

A few young men are wrapping up their naps. They sit quietly on their cots speaking softly. Sloan leads me to my cot, bringing fresh linens. The temperature in the room is perfect. Before I drift into blessed snoozeville, we share a few words on our sleep thoughts. She speaks in a hushed tone, even though the young male nappers have since left the room. Although our chat qualifies as an interview, I am aware she is preparing me for the nap.

She's quite knowledgeable about sleep science. Yes, it's a science—and a mystery—hence a suitable territory for art. Every night we willingly become temporarily paralyzed for 4-8 hours. Currently, approximately 50 % of the population people suffer from insomnia at some point in their lives. Just about every one of the body's processes is affected by lack of sleep. Scientists still do not know why humans sleep, but they know for certain that without out, it we lose function rapidly.

Eventually, we wind up our chat and I am ready to take my nap. I had been thinking about it all day, and it was time for me to claim my nap prize. Sloan returned to her post at the front of the room where she stands guard, reading or crocheting.

I slept. I dreamed. I became an art object, a sleeping one. I woke up-refreshed, full of calm energy and focus, as if my battery got an upgrade. That's the power of the nap.

Sloan experimented with the NAP, concept prior to the Art League show. “I had performed performance/participation art pieces around the idea of a community naps. For example, a story and nap arranged in a bar, a cuddle puddle/bedtime story as at a performance intermission to rejuvenate an audience for the remainder of the evening.”

Over the course of NAP Sloan has held several community naps, many have been sold out. Although I was not able to partake in a community nap, the idea seems like a sound one. Imagine your boss or your mother suggesting everyone take a group snooze. Productivity would go up and children would fight less and do better in school. Beth Secor read bedtime stories, and Ruby "Lips" Woodward whistled lullabies. Like a good clinician, Sloan kept meticulous notes on her blog, where she charting her experience and those of the participants. “I learned how willing/eager people were to connect with such a project. I think it had to do with the atmosphere--it almost became a sacred place to visit, whisper, be calm,” says Sloan. “Also the need for rest, reminiscing about grade school community naps--the project and space itself almost became a security blanket.'

Sloan also delivered naps if you were deemed lucky enough to be selected for a visit from the mobile nap unit. “The Mobile Naps grew out of the NAP project, and they will remain ongoing. The idea of an unforeseen context, and having participants pick a context, is something I am very interested in,” she says. “ Also, it is fun to bring the magic and permission to nap to them.”

Sloan has always been interested in the intersection between public art, public service and social spaces. She's drawn more to the slippery roles between art maker, curator, orchestrator and performer. NAP effortlessly flows between these roles. “In addition to art, my background is in Social Work,” she says. “On several occasions, I was asked if I was a social scientist, so the project really seemed to integrate the two well.”

Ending NAP came down hard on the community. Protests ensued. As with a nap itself, the show needed to end. A consultant was on hand to help those cope with the grief. She held a NAP station during Lawndale's The Big Show.

Sloan's project has re-framed the nap for me. It's not the same as going to bed at night. I take more naps now, in service to my writing and the art that I am writing about. It's a respite from the day, a pause, a welcome interruption of constant activity. It's decadent, luxurious, restorative and creative, all the things art should and can be. “From the beginning, the amount of people coming to nap exceeded my expectations. I continued to be amazed throughout the project by the returning nappers and new nappers,” muses Sloan. “This both distilled the project and was a pleasant surprise. The NAP project was magical for so many including myself.”
Posted by Emily Sloan at 2:17 PM No comments:

There is a lot to see at Lawndale Art Center's The BIG Show 2010! Take advantage of "The BIG Show Power Nap Station" to rest, rejuvenate, and replenish your energy as you take it all in! 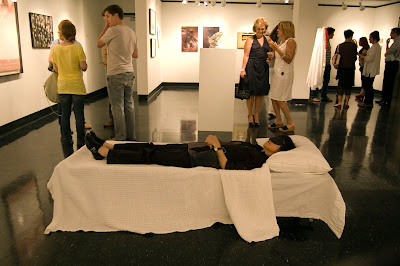 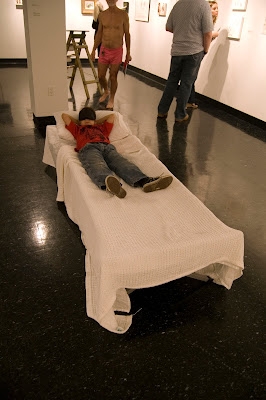 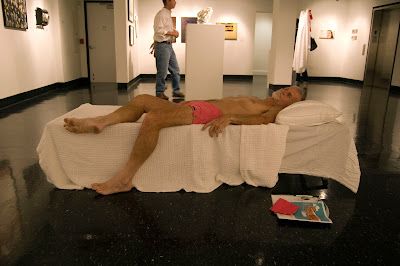 Posted by Emily Sloan at 9:16 PM No comments: